Based on input from guides and friends in Bogotá, this article presents innovations in cycling, public space, urban transport and urban art in the Colombian capital.

On a recent trip to Colombia, I was very surprised by its capital, Bogotá. Similar to Guatemala City, friends and travel blog articles had warned me against going to the Colombian capital, saying it was still unsafe and quite ugly. But I beg to differ!

Like pretty much every other traveller in Colombia, I also went to the digital nomad and urban planning hotspot Medellín. While its electric escalators  impressed me a lot, I decided to dedicate a whole article to Bogotá.

This city is just recovering from the drug war in Colombia, which is arguably not even over. But the fact that the FARC have mostly been defeated has led to general peace and tranquility. Tourism only became a thing in Bogotá about five years ago and you still notice how there is not a lot of touristy infrastructure.

But what I loved is that Bogotá is using a lot of its resources to invest in public infrastructure and improvement of public space. Various tour guides helped me to understand this better – a shout-out to Sebastián, Diana and (Bogotá Street Art Tours) as well as Ruta de la Esperanza and Bogotá Graffiti Tours. I’m handing over to them:

One of the first things that struck me is that not just in the centre, but also on the outskirts of Bogotá, there are very nice and interconnected bike lanes. Sebastián explains to me that people even get together on a regular basis to cycle some 30 or 40 kms in order to stay fit. This means that cycling is not only a means of moving around in Bogotá, but it is actually “cool” and people see it as a sport. Many other cities can learn from this attitude!

In city centre, more and more car lanes are being taken over by bicycle-only lanes like the one you can see in the picture. Sebastián says that wealthier people in the city do not like this trend since cars will be banned from city centre and there is less parking space. However, pretty much everyone else is happy with this development, and you can already see countless cyclists using the lanes – almost as many as in Copenhagen or Amsterdam!

Even The Guardian has a piece about cycling in Bogotá.

Bogotá is quite good at public transport, and it has to be: Despite innovations like the Bus Rapid Transit System “TransMilenio”, the 8 million-strong city is still congested and polluted (almost as badly as Mexico City). Therefore, Bogotá is investing not only in bicycle lanes, but also in cable cars. The first line only opened in the end of 2018. In the spirit of integrated urban transport, it connects one of Bogotá’s marginalised areas (Ciudad Bolívar) with city centre, allowing easier access to jobs. About 675,000 people live in Ciudad Bolívar and a considerable amount has access to the cable car, which is saving them a lot of time. To read my related article about Mexico City’s cable car, click here.

Diana, who has spent all her life in Bogotá, is taking me to use the cable car and to get to know Ciudad Bolívar. We are able to take the TransMilenio bus all through the city and arrive directly at the first stop of the TransMiCable cable car line. It is 7.2 km long and takes you to the very edge of the city in 13 minutes. For people from Ciudad Bolívar, this means a time saving of at least 45 minutes and in many cases up to two hours.

The people interviewed during the pleasant ride all tell me that the love taking the cable car. It has had a beneficial impact on their life and even resulted in additional investment from the city. As you can see in the picture above, houses are now much prettier due to the painting project. But also, and much more importantly, the city of Bogotá gave out housing titles and invested in surrounding infrastructure such as schools and community centres along the line of the cable car.

We arrive to the last stop, which is called Paraíso, and get off to get to know Ciudad Bolívar. Diana takes a step back to allow community workers from Ruta de la Esperanza to take over. This NGO is active in the Paraíso area and is offering alternatives to youth, providing food and doing a lot of other valuable work – visit their Facebook page!

Estrellita tells me that there are still many things missing in Ciudad Bolívar, and that the cable car mostly helps with transportation. The integrated urban development approach is well-meaning, but around this area they do not feel a lot of impact. Here, they face big challenges such as dealing with countless refugees from Venezuela, regular inundations, a missing waste collection system and poor quality water.

However, the increased touristic interest in Ciudad Bolívar, which used to be a no-go zone, is perceived to be very positive by Estrellita and other NGO workers as well as residents of the Paraíso area. In the longer term, there will be more economic opportunities in Ciudad Bolívar itself. For now, there is already an amazing street art project that incentivises youth to focus on creativity instead of doing drugs or getting into crime.

Most importantly, the reputation of Ciudad Bolívar is changing thanks to the cable car line. “No es como lo pintan, sino como nosotros lo pintamos” – Ciudad Bolívar is not how other people “paint” it, but how the residents paint it themselves. This double meaning implies the use of street art, but also the many prejudices against this part of Bogotá, and a hope of changing those.

To read more about my visit to Ciudad Bolívar, head on over to Medium. 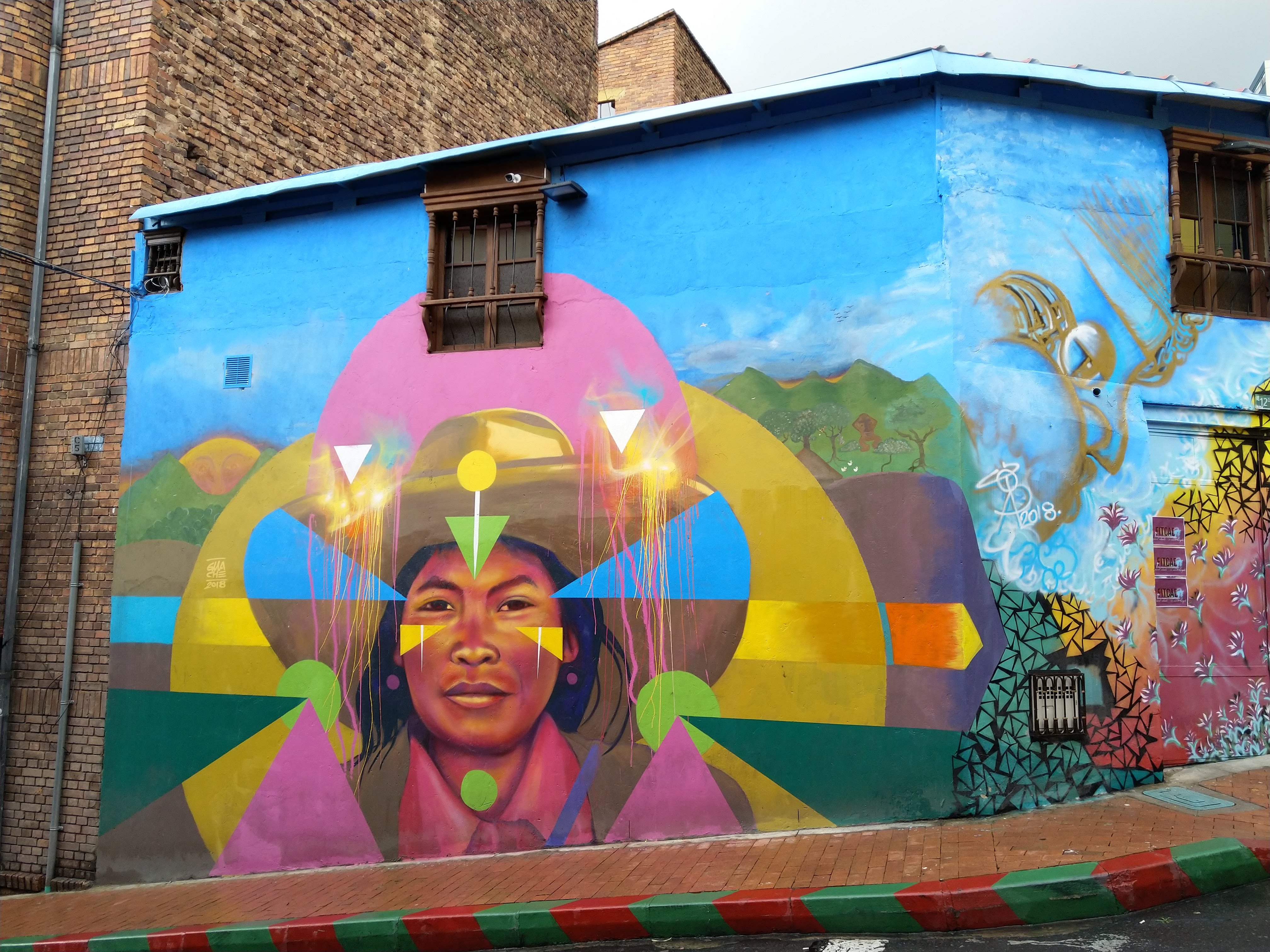 One of the best walking tours I have ever done is the the Bogotá Graffiti Tour. Jay, a Colombian raised in the United States, led us through some of the hippest areas of the city, whose walls function almost like a newspaper. Political opinions, art and a lot of statements about indigenous population turn Bogotá’s facades into colourful, impressive, entertaining and thought-provoking galleries. The Colombian capital is now one of the most important cities for street art in the world, and I can really recommend having a look!

Jay told us how it used to be very difficult to do graffiti or any kind of street art in Colombia. However, after a tragic death of an underage artist at the hands of the police, they have gotten much softer. Another factor that basically (though not officially) made street art legal in Bogotá was none other than Justin Bieber: He decided a few years ago to join the underground art scene in this city after one of his concerts. A police escort followed him and allowed him to paint a mural. Within hours, this was painted over by enraged local artists. However, they could use this event against the police, arguing that graffiti was made legal by Justin Bieber.

If you are in Bogotá, definitely take this tour, which is offered every day. Around La Candelaria, you can find some of the best work, but many other areas of the city are turning more colourful by the day. Famous Colombian street artists now come to Ciudad Bolívar and other “forgotten” places to spread a bit of their magic there as well. Apart from the artistic and touristic value of this, it also means that children growing up in these areas now have a new aspiration: They want to become graffiti artists.

The city has many enjoyable parks, but as an urban planner I was most struck by the Eje Ambiental in the city’s central area. I actually think it is the most perfect public space I have ever seen. Have a look at this article I wrote about it on Medium.

Looking at the history of the Eje Ambiental, you do not need to go back a long time. The project was first conceptualized in 1997 by two Colombian architects and approved in 1999. Bogotá’s Transmilenio Bus Rapid Transit System was planned at the same time on the Avenida Jiménez, one of Bogotá’s busiest roads. Apart from making 2.8 km of this Avenida into a more enjoyable space for walking, the architects also decided to bring the formerly subterranean Río San Francisco back to the light of day. The result resembles a park much more than a sidewalk.

The 2.8 km long pedestrian walkway takes over about 80% of the street. Some taxis and the Bus Rapid Transit system pass on the sides, but the priority is on pedestrians (finally!). In the center of the Eje Ambiental, there is a river, which provides a nice, fresh feeling and invites children, pets and curious adults to play. Palm trees, shrubs and other plants line the wide, pleasant and smooth walking areas for pedestrians. There are enough waste bins and you walk through one of the city’s nicest districts, passing from the university and ending up at the core of Bogotá. You get to see the urban landscape change while you enjoy the walk, and there is a lot of street art, street musicians and interesting shops on the way. Informal vendors, who often take up a lot of space on the sidewalk, have been banned from this walkway, but you can find the occasional vendor offering fresh fruit or dried banana crisps.

The Eje Ambiental, as well as other public spaces in Bogotá, is open to everyone and accessible. I saw countless locals enjoying the shadow, chatting on one of the comfortable benches, strolling with an ice cream in hand, or walking their dogs. You easily reach city center without being bothered by vehicles or traffic lights. Finally, pedestrians have been given complete priority. Imagine if the whole city offered this kind of walking experience! This is at least a first step towards designing better public spaces. 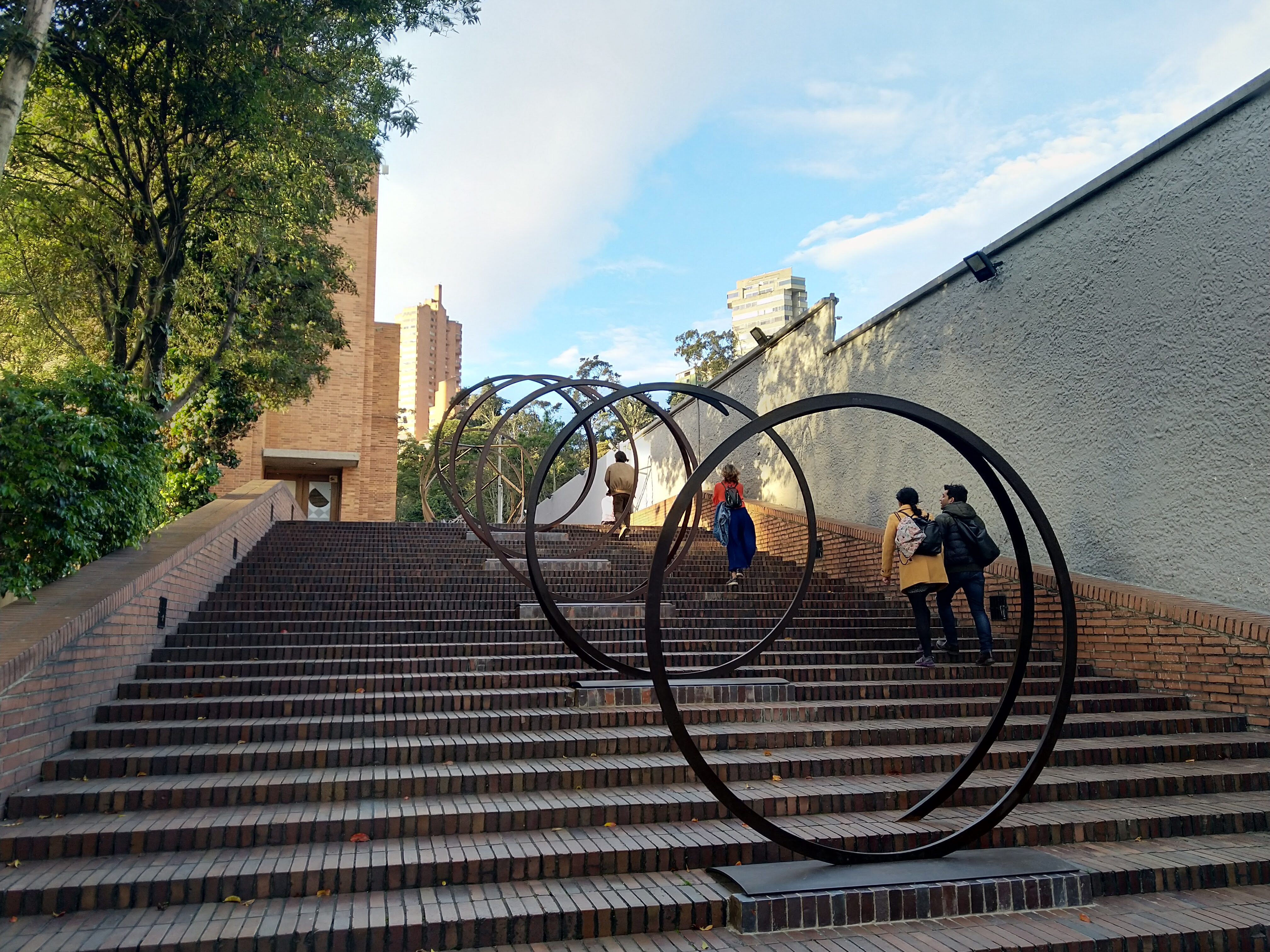 I saw many other fascinating projects and community centres in Bogotá, but wanted to leave you with these four conclusions:

Over at the @urbanismbookclub, we'll read this boo

parCitypatory is four years old today, which is why I am sharing four starting points as ideas for participating in your own city.