In this article, I explore the beliefs of urban community gardening and their participatory potential.

I envision a day when every city and town has front and back yards, community gardens and growing spaces, nurtured into life by neighbors who are no longer strangers, but friends who delight in the edible rewards offered from a garden they discovered together. Imagine small strips of land between apartment buildings that have been turned into vegetable gardens, and urban orchards planted at schools and churches to grow food for our communities. The seeds of the urban farming movement already are growing within our reality.

(Greg Peterson, Grow Wherever You Go Discovering the Place Where Your Garden Lives, 2009, www.urbanfarm.org)

Co-producing green space, planting your own vegetables, raising awareness for gardening techniques, preserving knowledge and above all, providing a meeting space – these are some thoughts behind the idea of urban community gardening. Often, the gardens are founded as a grassroots initiative by community members who want to have more green spaces in their neighbourhood. Everyday spaces such as this patch below … 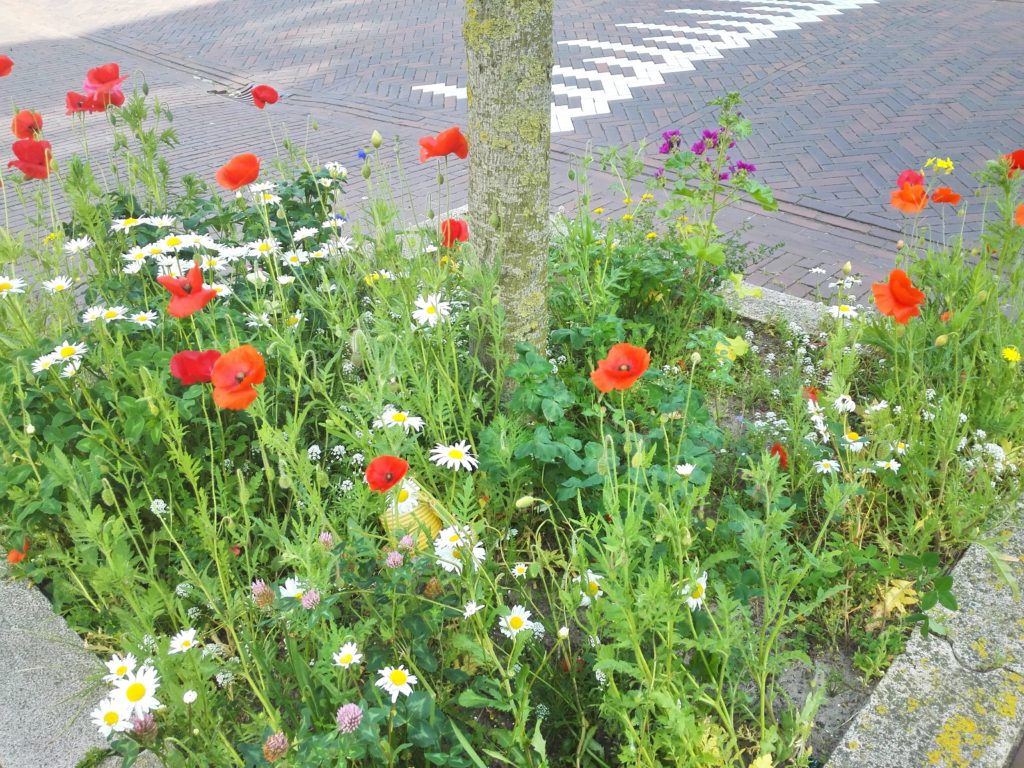 … or neglected and abandoned plots of land are occupied or acquired to turn them into a garden, which is then maintained by all members of a neighbourhood who would like to help. Urban gardening can range from a whole neighbourhood planting a bed garden in an abandoned lot to a cooperative keeping bees for honey on their balcony to a family having a container garden on their roof, etc. I focus on community gardens in this article.

The meaning behind urban community gardens

Apart from providing green spaces, on another level the taking over of formerly abandoned lots means altering their meaning from sites of neglect and urban disadvantage to new spaces of empowerment, community and identity. Research on urban community gardening (see below for some recommendations) is divided between admiring urban gardening as an act of resistance versus understanding it as a mechanism to support existing neighbourhoods by helping them to accommodate change. For me, urban gardening is about co-designing the city, taking ownership, making community and providing for a more resilient and cohesive neighbourhood.

The idea has been around for a long time. For example, in Germany the first urban gardens were established during the Industrial Revolution when Moritz Schreber started an educational initiative to provide children with green space in the grey industrialising cities. Because of the poor wages, families soon started farming their own food in these allotment gardens (“Schrebergärten”), which we still have today. While each family farms on their own plot of land in these allotment gardens, there still is a great sense of community and many interesting projects and initiatives start out from discussions over the fence.

Some community gardens in cities have come back to the original idea of educating urban population. They offer not only the opportunity to take part in gardening, but there are also seminars on endemic plants and other traditions and potentials related to gardening.

Often, urban gardening is mainly about community and providing a meeting space for neighbours to come together and exchange. I have the impression that in wealthier communities, the gardens are more common and used as a meeting space, whereas in poorer communities the gardens are used for growing food and not so much for community purposes, since strong bonds already exist in many cases. An interesting development is the trend to tackle not only production of produce (and of a sense of community), but other issues such as poverty, environmental degradation and safe green spaces, and even social justice in urban gardening projects.

Of course, every community garden is unique and has to be understood from a local perspective. Still, in many project there is a desire to address local injustices of different kinds, be they social or environmental, and to participate in creating a neighbourhood. The importance of people’s everyday surroundings is acknowledged and is now turned into an improved space for the community. Milbourne (2012) calls this the “spatial manifestation of transition from injustice to justice as well as the empowerment of local community”.

I was asking myself the question whether public participation can be increased by urban community gardening. So far, my impression is that the answer is “yes, at least partly” – read on and then let me know what you think!

Green space in the city is often used by many members of a neighbourhood and therefore offers a great place for get-togethers. People will get to know their neighbours and start discussions on everyday issues of the community, but also on bigger issues. Actually, the whole process of setting up an urban garden can lead to more participation. So-called “participative citizenship” means that you take part in actively shaping your city, which in itself is considered to be a political act. Ideally, the process of shaping the city is inherently participatory (participatory participation…), as is the case with a community garden that is used and cared for by many members of a neighbourhood. Gardening has a low-entry barrier for participation and nature calls out to almost everybody, even if it is only a small patch of green. Gardening also works across cultures and languages. In Germany, there are more and more gardening projects connecting refugees with local community members.

The most participatory form of urban community gardening, considering the design of the city, is guerrilla gardening. It is a very critical and radical action, comparable to street art. The often political and very spontaneous movement of guerrilla gardening describes the practice to illegally “adopt” a public space in need of care and to cultivate it without actually owning it. This started in the ‘70s in the US. Activists believe in the power of a single plant, stating that the idea behind the movement is “as simple and unstoppable as a plant poking up through a crack in the pavement” (David Tracey: “Guerrilla Gardening: A Manualfesto”). This is sometimes ridiculed – actually, one of the practices of guerrilla gardeners is throwing seed balls at random green spaces or to-be-greened spaces.

However, these guerrilla gardens are bound to be closed down rather soon after they are started. While urban garden projects are often not there for eternity, they usually work better and offer a more sustainable and reliable public space to a community when they are established legally.  Here, an empowering government can support communities by providing or renting available land and making it easier to establish the garden.

A related question is how to manage urban gardens, which often constitute a common and publicly accessible good. How can rules for community gardens work? Who can set them up and how are they being implemented? Or do they maybe work without any rules? This can only be answered by considering every individual garden, since urban gardening projects come in all forms. Sometimes a cooperative forms to manage the garden and some representatives are elected. Sometimes the gardens exists (at least for some time) without any written rules.

Another critical issue is the danger of gentrification. Commons can easily become enclaves, used only by people within a certain geographical range and level of education. One of the most important aspects of urban community gardens is to enable access for everybody. Here are some fascinating thoughts on gentrification in Detroit’s community gardens. 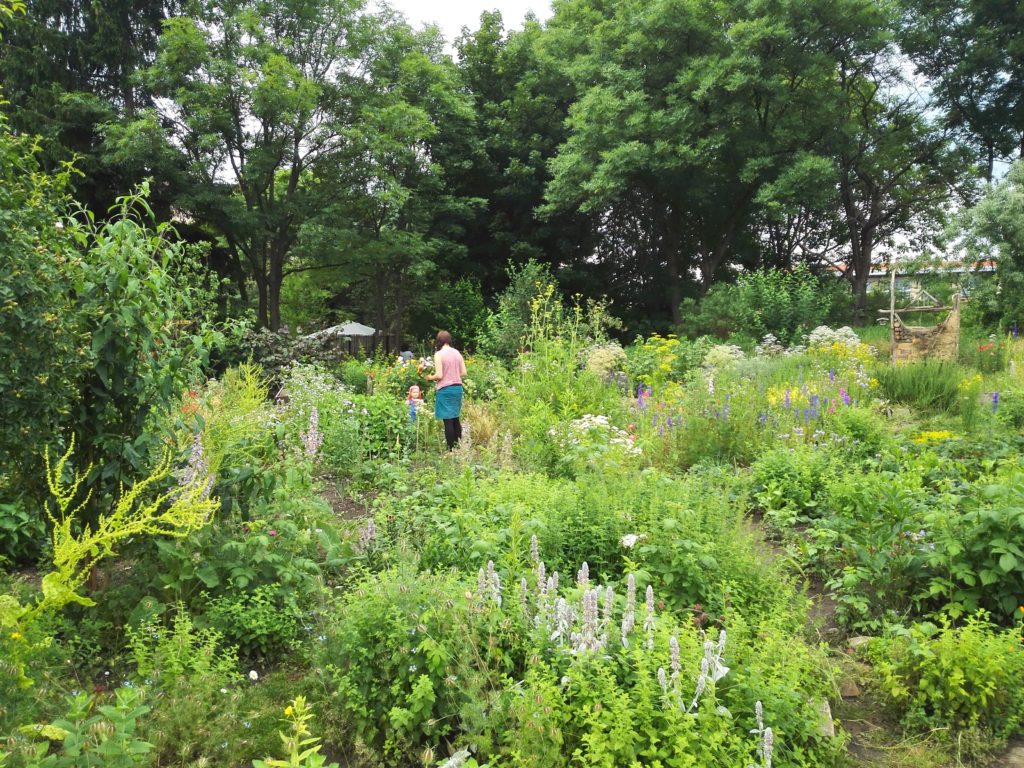 In conclusion, I would say that urban gardening is participatory from an urban planning and urban design point of view. It often leads to more liveable cities, more civic engagement and is in many cases connected with political issues such as social injustices or refugees. However, sometimes the gardens are just there to provide food or a nice space to relax. Often, urban gardening is regarded as some kind of utopia that can magically increase community participation or lead to citizen governance over their own neighbourhood. I would argue that this can happen, and it is great when it does, but there shouldn’t be too many hopes for all kinds of results “planted” into the garden. Still, the process of establishing an urban community garden is inherently participatory and an expression of civic participation. To understand urban community gardens, it is important to consider the local context and culture in each individual project case. One should also keep in mind the power of co-designing a city and the support that a municipal government could give.

This actually reminds me of how citizens use street art to shape their own city.

Urban Farming as a future source of nutrition?

Here are some recommendations for further reading material:

Picture source of the header: Springfield Community Garden by Jeff Wright, own work, CC BY 2.0

Why not study online and for free? I introduce you to MOOCs and go back to some lessons from my class on African Cities.

Exceptional circumstances, such as the current pandemic, have important consequences for urban planning. Here, I look into public spaces and the changing idea of three places.