Rashiq from Future Cape Town developed "Your City Idea", a mobile voting booth for everybody to vote on their ideas for improving the city.

How to collect citizens’ voices and ideas? How to start a conversation? How to enable participation in the planning of a city with a history as segregated as Cape Town’s?

The South African NGO Future Cape Town asks these questions and develops innovative answers, as you can see in the video above. An especially intriguing example is the ballot box installation called Your City Idea, which allowed citizens to vote and give input on certain issues in Cape Town. The installation encourages active public participation in the public sphere. The project was, according to its developers, “created to break away from the traditional techniques of gathering information from the public while at the same time facilitating meaningful public engagement on social and urban issues.” It is both a creative urban design feature and an encouragement for citizens to rethink their city in terms of service delivery, access and sustainability.

In the last few years, the large, bright yellow boxes were installed in several public spaces. They attracted many curious onlookers and pedestrians and all were encouraged to cast their vote. Venues included a public square, a bus station, a busy street and several indoor spaces.

The feedback for Your City Idea was very positive. The number of people who cast their paper ballots was higher than anticipated (up to 160 comments per day) and the project researchers were pleased with the outcomes. The volume of responses highlights its success in engaging the public and gathering information. The organisation stated that “in light of the continuous outcomes, Future Cape Town seeks to extend similar creative ways of engaging with the public on urban concerns for the city of Cape Town.”

Your City Idea showed that, with some guidance, people were interested in engaging with the urban issues in their city.

Below are the two questions Your City Idea focused on:

In your Future Cape Town, the Foreshore Freeways looks like…?

In your Future Cape Town, the communities we live in look like…?

While the “future communities” question provides interesting insight into the housing desires of residents, I think the question about the freeways, which have long been an urban planning issue in Cape Town, is particularly interesting.

Due to increased traffic and resulting congestion, the city of Cape Town conceptualised a new freeway in Foreshore in the 1960s. Work began in the early 1970s, but since there were severe budget constraints, the project was never completed. Since then, the unfinished structure and especially the Foreshore Freeway Bridge are a subject of constant speculation, but also a tourist attraction.

In 2012, Cape Town announced its collaboration with university students from the University of Cape Town to find a future solution for this unfinished bridge. Despite many ideas such as turning the bridge into a roller coaster, the question remained unsolved for a long time.

Just recently, the City of Cape Town announced that land below the three unfinished highways will be auctioned off to the highest bidder, provided that they suggest solutions for transport, access, congestion alleviation, and, most importantly, affordable housing provision for different income groups. The revenue will be used to finish the freeways, making it possible to both reconnect the freeway and develop the surrounding land. The result of the bidding process is expected in December 2016 and will be preceded by a public participation process, in which residents and other interested parties can view (and hopefully critique) the bidders’ intended designs in 3D models.

It promises to be an interesting process! While it was a step in the right direction to include students in the design process, it is a pity that none of their ideas have been used. It remains to be seen how seriously the voices of the public will be taken. Rashiq Fataar, the founder and director of Future Cape Town thinks that installations such as Your City Idea and the voting results can slowly influence the official decision process but must be a part of a much broader public campaign.

Tools like the Your City Idea ballot box can help to enable quick and uncomplicated public participation by letting the public vote on their favourite ideas in a very accessible and inclusive manner. This is an example of how urban planning questions can be answered by the public in a participatory way.

I asked Rashiq about the future plans for Your City Idea or similar initiatives: “It is our belief at Future Cape Town that new and exciting models for engagement with the public are not only possible, but worthwhile. Encouraging public participation needs to extend beyond meeting formal legal requirements, and should include creative thinking and innovation, fitting of our designation as World Design Capital 2014. We hope to do the installation again in the near future at our parklet on Regent Road (read more). We are also working on a similar concept which uses modular boxes that can be more easily assembled and which incorporate iPads or touch screens (read more).” 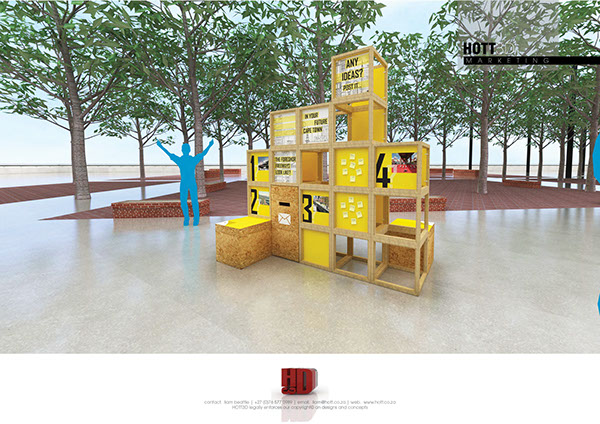 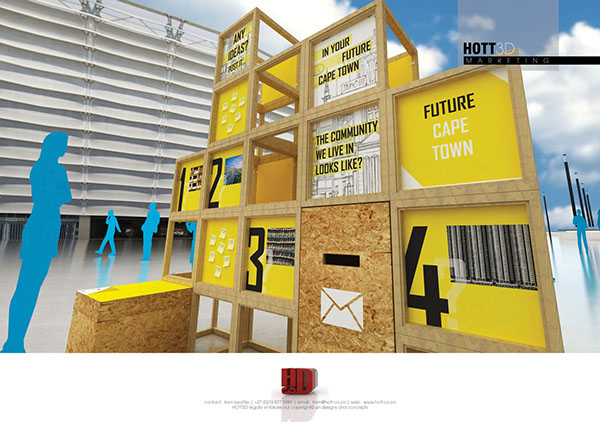 Click here to read more about the idea of modular voting booths.

Rashiq explained that Your City Idea is very transferrable since it uses modular materials and does not need a major upfront investment. Let’s hope that it will come to many more cities soon!

Note: The installation was co-designed by Liam Beattie and sponsored by local company HOTT3D Marketing.

Annika from Pedestrian Space gives some insights into the 15 minute city and criteria for walkable neighbourhoods.

In this report from the Metropolitan Solutions Conference I talk about smart cities and their lack of possibilities for participation.

The creativity and different perspective of children can be used in different ways to enhance urban planning.